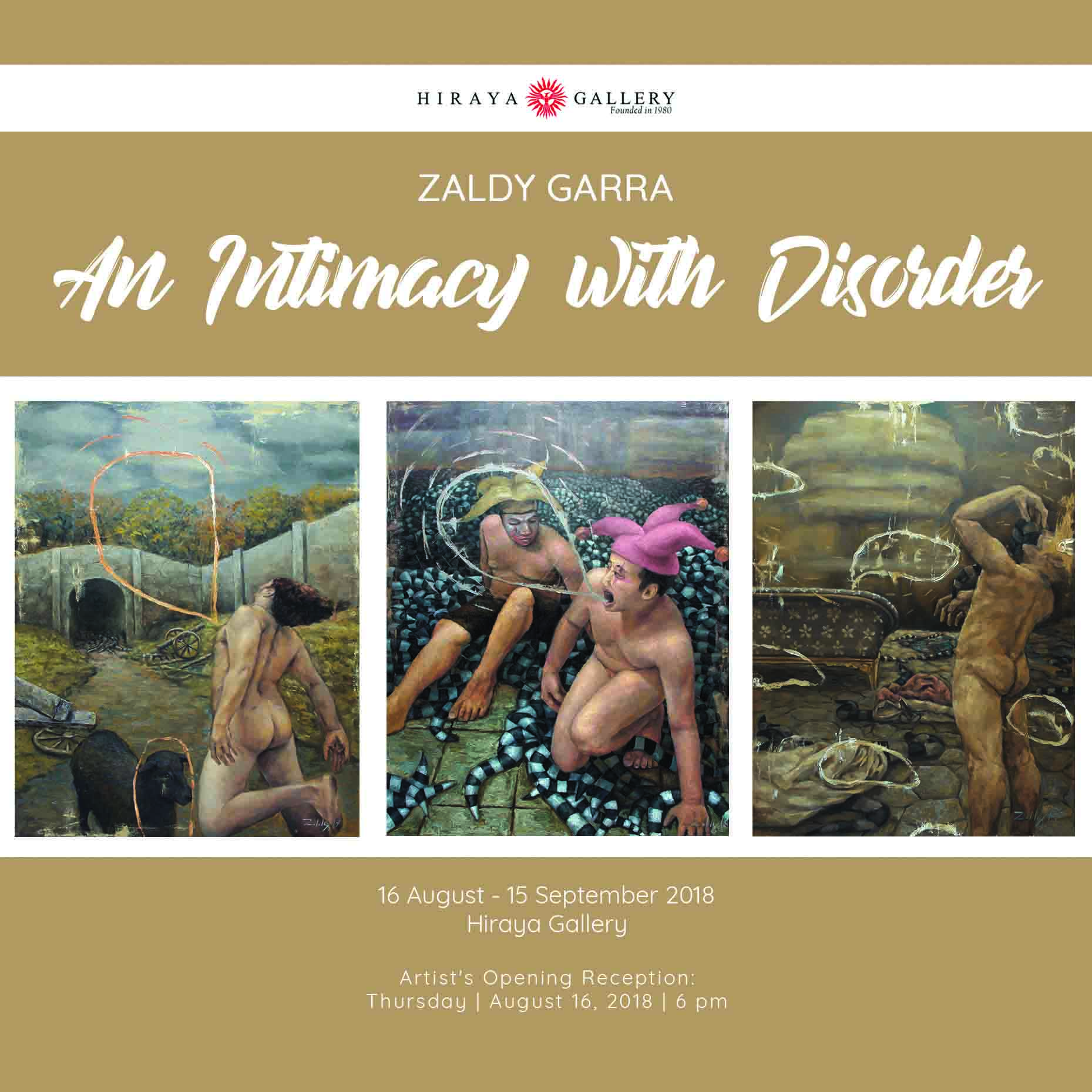 Exhibition Notes: An Intimacy with Disorder

The portraits of ZaldyGarra bear thescenographic qualities of an editorial photograph. Despite framing the artist in different states of vulnerability, the careful composition of elements do not lose their artful arrangement. The resulting series is both intimate and expansive, suggesting an ongoing narrative of one man’s battle with his inner demons. Yet, the works also betray the loss of control that often accompanies mental illness, instead they show a more lucid reflection on the disorder.

Portraying the artist’s ongoing struggle with depression, the visions in the portraits are dreamlike and surreal, rendered in alternating strokes of feverish white heat and carefully calculated layers where striped tentacle-like creatures skitter and squirm in the background.Garra appears in these autobiographical works, sometimes both as protagonist and antagonist, neither the hero nor the villain of thisstory of self-versus-self. In Bathtub Time Machine, he reclines in a tub with his head back, while the tiled walls surrounding him crumbleaway toreveal a desolate landscape. A touch of humor is lent by a dog smiling in the foreground and scrawls of white paint that appear both ghostly and scratchy, as ifpiecing together the artist’s disorganized thoughts. “I don’t know why, it just happened to be like that,” says Garra of these works which he had composed directly onto the canvas – portraits of a conflicted individual and his disaster-stricken inner landscapes.

“We never lose our demons, we only learn to live above them,” says Garra, loosely paraphrasing a line from the Marvel blockbuster, Doctor Strange, which was, among many other things, a meditation on the ego and transcendence. Past works, such as 2015’s Just a Fv$%^ng Band-aid Solution and The Oppressor from 2014, suggested an intimacy with his subjects, filling the frame to the point of claustrophobia. In this solo however, by placing himself in the frame and maintaining a more comfortable distance from his subject, ZaldyGarra portrays not a hopeless fight against his monsters—and himself—but the beginning of a journey towards finally overcoming them.

The iconic Surrealist Salvador Dali is often quoted as saying, “The sole difference between myself and a madman is the fact that I am not mad!” While the link between madness and the creative impulse is often romanticized and mythologized, Garra acknowledges that art also plays a part in healing and transformation.With that, madness is converted to the patient preparation of paints and canvas, the slow laborious process of applying oil on canvas acting as both diagnosis and cure. By achieving clarity through representation, Garra also shows his capacity not to suppress, but to sublimate the unpleasant, line by jagged line, brushstroke by brushstroke.

RizaldyGarra was born in 1988 in Manila, Philippines. He has participated in numerous group exhibitions since 2008 and was a four-time semi-finalist in painting at the Metrobank Arts and Design Excellence competitions. Garra is currently working as a technical associate at Palomar Fine Arts Services (PFAStudios) in Antipolo, through which he also represented the organization at the 2017 Good Pitch workshops held in Jakarta, Indonesia. Through his painting practice, Garra sheds light on individual issues that demand social understanding and community support. This is his first solo exhibition